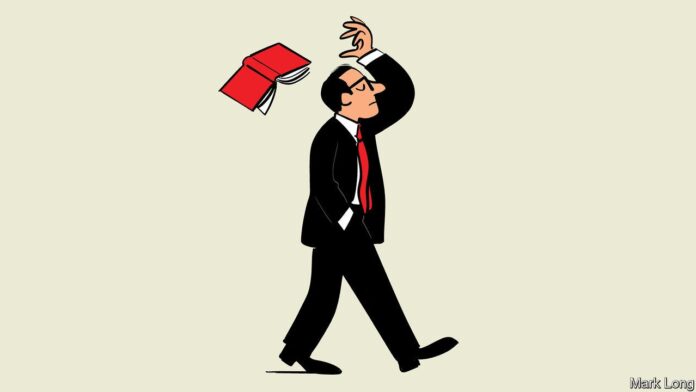 FOR A MOMENT this week investors could afford to ignore stockmarket superstars like Amazon and Alibaba. As news of a vaccine broke, a motley crew of more jaded firms led Wall Street higher, with the shares of airlines, banks and oil firms soaring on hopes of a recovery. The bounce has been a long time coming. So-called value stocks, typically asset-heavy firms in stodgy industries, have had a decade from hell, lagging behind America’s stockmarket by over 90 percentage points. This has led to a crisis of confidence among some fund managers, who wonder if their framework for assessing firms works in the digital age (see article). They are right to worry: it needs upgrading to reflect an economy in which intangibles and externalities count for more.

For almost a century the dominant ideology in finance has been value investing. It has evolved over time but typically takes a conservative view of firms, placing more weight on their assets, cashflows and record, and less on their investment plans or trajectory. The creed has its roots in the 1930s and 1940s, when Benjamin Graham argued that investors needed to move on from the pre-1914 era, during which capital markets were dominated by railway bonds and insider-dealing. Instead he proposed a scientific approach of evaluating firms’ balance-sheets and identifying mispriced securities. His disciple, Warren Buffett, popularised and updated these ideas as the economy shifted towards consumer firms and finance in the late 20th century. Today measures of value are plugged into computers which hunt for “factors” that boost returns and there are investors in Shanghai loosely inspired by a doctrine born in Depression-era New York.

The trouble is that value investing has led to poor results. If you had bought value shares worth $1 a decade ago, they would fetch $2.50 today, compared with $3.45 for the stockmarket as a whole and $4.65 for the market excluding value stocks. Mr Buffett’s Berkshire Hathaway has lagged behind badly. Despite its efforts to modernise, value investing often produces backward-looking portfolios and as a result has largely missed the rise of tech. The asset-management industry’s business model is under strain, as our special report this week explains. Now one of its most long-standing philosophies is under siege, too.

Value investors might argue that they are the victims of a stockmarket bubble and that they will thus be proved right eventually. The last time value strategies did badly was in 1998-2000, before the dotcom crash. Today stockmarkets do indeed look expensive. But alongside this are two deeper changes to the economy that the value framework is still struggling to grapple with.

The first is the rise of intangible assets, which now account for over a third of all American business investment—think of data, or research. Firms treat these costs as an expense, rather than an investment that creates an asset. Some sophisticated institutional investors try to adjust for this but it is still easy to miscalculate how much firms are reinvesting—and firms’ ability to reinvest heavily at high rates of return is crucial for their long run performance. On a traditional definition, America’s top ten listed firms have invested $700bn since 2010. On a broad one, the figure is $1.5trn or more. Intangible firms can also often scale up quickly and exploit network effects to sustain high profits.

The second change is the rising importance of externalities, costs that firms are responsible for but avoid paying. Today the value doctrine suggests you should load up on car firms and oil producers. But these firms’ prospects depend on the potential liability from their carbon footprint, the cost of which may rise as emissions rules tighten and carbon taxes spread.

Value investing’s rigour and scepticism are as relevant as ever—especially given how frothy markets look. But many investors are still only just beginning to get their heads round how to assess firms’ intangible assets and externalities. It is a laborious task, but getting it right could give asset management a new lease of life and help ensure that capital is allocated efficiently. In the 1930s and 1940s Graham described how the old investing framework had become obsolete. Time for another upgrade.■